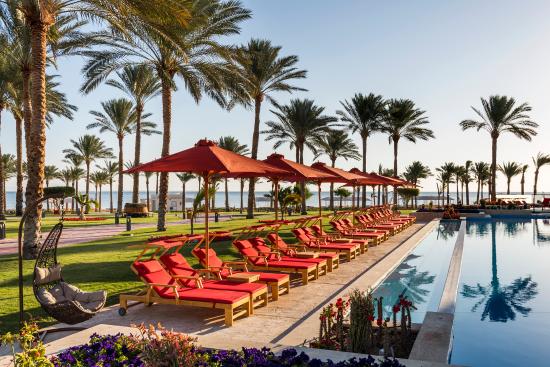 We have just come back from our stay at the Rixos premium seagate and have left feeling slightly disappointed after reading so many amazing reviews and it earning its ranking of number 1 hotel in Sharm on trip advisor.

The problem with these reviews are that they are mostly from people that don’t have anything else to compare It to. In 2016/17/18 we stayed in the Stella Di Mare which at the time was ranked number on trip advisor and we have also stayed at the number 1 ranked hotel in Hurrgarda so we have a lot to compare the Rixos to and hopefully this will help people when choosing this hotel.

I will start with the positives…..

We were upgraded on arrival which was very much appreciated as the room we had booked was in the waterpark side of the hotel which may as well be a different hotel. So when booking if you have selected an aqua room/water room bare in mind that this in over a road and linked by an underground tunnel and shuttle bus.

We had an issue with our room on the first night and so went to reception the next day and they moved us without hesitation to a quieter room on the other side of the hotel. Thank you very much.

The staff by the pool Hanoi, Kamel and Bahaa were absolutely brilliant and looked after us every day, by far the best part of the stay way their service.

The animation staff Yanina, Oksi and Saad were very friendly and fun. We are very active couple so it was nice to have wide variety of daily activities to play.

Alongside their daily activity programme they also have fitness programme which has a number of classes from Yoga, boxing, Zumba and TRX. This is very impressive and we have not seen this level of sport and activities provided.

The indoor and outdoor gyms are very well equipped.

The a la carte restaurants we in general, very good. The meat in the Brazilian was fantastic, the asian was great and the BBQ was a nice evening sitting out in the open air.

The wifi was generally excellent, by far there best we have had in Egypt.

If you have children the kids club looks excellent and I can see why a lot of families would choose this hotel because of that.

The security around the hotel is very good! One day we watch a security guard following an unattended 2 year old around the pool for around 5 mins, he hovered closely while trying to locate her parents. The two year old then went on to take her shoes off and try to get in the deep end of the pool which is when the lifeguard and security guard picked took the little girls hand. If they weren’t there things could have been a lot worse.

The evening entertainment is so loud that it disrupts the entire hotel, something we heard a number of guest complain about. The reason we moved our “upgraded” room was that the bass shook the doors and walls of the room so hard we couldn’t sleep, it was utterly ridiculous. Even after moving across the hotel and having other blocks of rooms between us it was still extremely loud.

Other than the pool bar staff mentioned above, the service was generally not great. The cocktails across the board were awful, in fact some of the worst cocktails either of us have ever drunk, which is impressive as they also didn’t seem to have any alcohol in them. We went through the entire list and found 2 we could drink, and stuck to them for the remainder of the trip. Service was also painfully slow, often making it impossible to get a drink before the dinner slot. Which leads onto the next issue.

The restaurant booking system, its basically a bit of a nightmare, so be prepared to be sat refreshing your window at 8.59am is you want a seat.
The buffet restaurant, the food was ‘ok’ although nice lady we met got gastroenteritis on her first day. the service due to covid rules was a real pain, and also laughably NOT covid safe. The entire hotel had bad coughs, it was very obvious that covid was everywhere, even the staff handling the food.

The reef is VERY healthy and beautiful. The negative is that its very rarely open. The wind justifiably kept it closed some days, but many other days, it was closed seemingly because the life guards couldn’t be bothered to watch anyone in the water. There was no reason for us to not have access for several entire days. We were not impressed. I’m making this assessment as somebody who understands water safety and is fully capable of assessing if it was safe. There is also and absolutely TINY section of reef to actually enjoy within the cordons, which was equally annoying.

Aside from the animations staff listed above, the sports and recreation staff were miserable to the point of being extremely rude, during every interaction we had over 2 weeks.

The rooms are very tired, and dated, certainly not 5star rooms, not even close. Compared to Premiere Le Rive in Hurghada, the Rixos rooms are very shabby. The beds were incredibly uncomfortable and everything felt rather cheap.

For those who don’t know, or intend on diving Namq Bay is very far out in the sticks. It’s a long drive to the port to go diving.

The main restaurant very much felt like being a Butlins, it was chaotic, difficult to find a table and we hated the fact you couldn’t serve yourself. They had roped off a 2m barrier around every food station which made it difficult to see and read what the food was. I understand that this is due to covid but it made no sense as pretty much every guest had it during their stay and it just made big queues which then meant everyone was stood next to each other anyway, which defeats the object.

We spent 3 days out of the hotel due to my husband being a diver, on the last day we decided to ask for a box so we could take some breakfast onto the boat unfortunately we were told that we couldn’t take any food with us and had to arrange this the night before and then a box would be made up. I don’t think this is good enough and for the money we paid what harm would it have done to be allowed to grab a few pastries with us.

This hotel is not for us but I can see why it would appeal to families. It is also NOT ultra luxury as describe.

One of main reason we wouldn’t be able to come back to this hotel. It was roughly 90% Russian guests during our stay, who were not just painfully rude to us at every given opportunity, but also horribly rude to the staff which made us very uncomfortable daily. It made several situations unpleasant and ruined some things for us.

We paid a lot of money for this holiday and it was simply not worth the money we paid in comparison to what we have paid before in Sharm and received a much better holiday. Don’t be sucked into this hotels ranking on trip advisor.