Seattle is a must-visit city with outstanding gastronomy, cultural icons, and healthy nightlife. Here is a guide to 2 days in Seattle.

Seattle, a seaport straddling an isthmus between Puget Sound and Lake Washington, is a thriving metropolis in the Pacific Northwest. Known as the Emerald City, this harbor attracts 40 million tourists annually. My husband and I spent 2 days in Seattle, Washington, on a stopover before jumping on a cruise ship bound for Alaska.

Originally, the town was settled by Native Americans some 4,000 years ago. It wasn’t until the 1850s that a permanent European community was established here. Logging became the first major industry but was quickly replaced in 1896 by the discovery of gold in Canada’s Yukon. Within a year, Seattle emerged as a boomtown outfitting the hordes of prospectors stampeding northward to the Klondike. The wide-eyed greenhorns panning for nuggets of gold eventually petered out, yet today the city of Seattle remains a viable gateway to Southeastern Alaska. 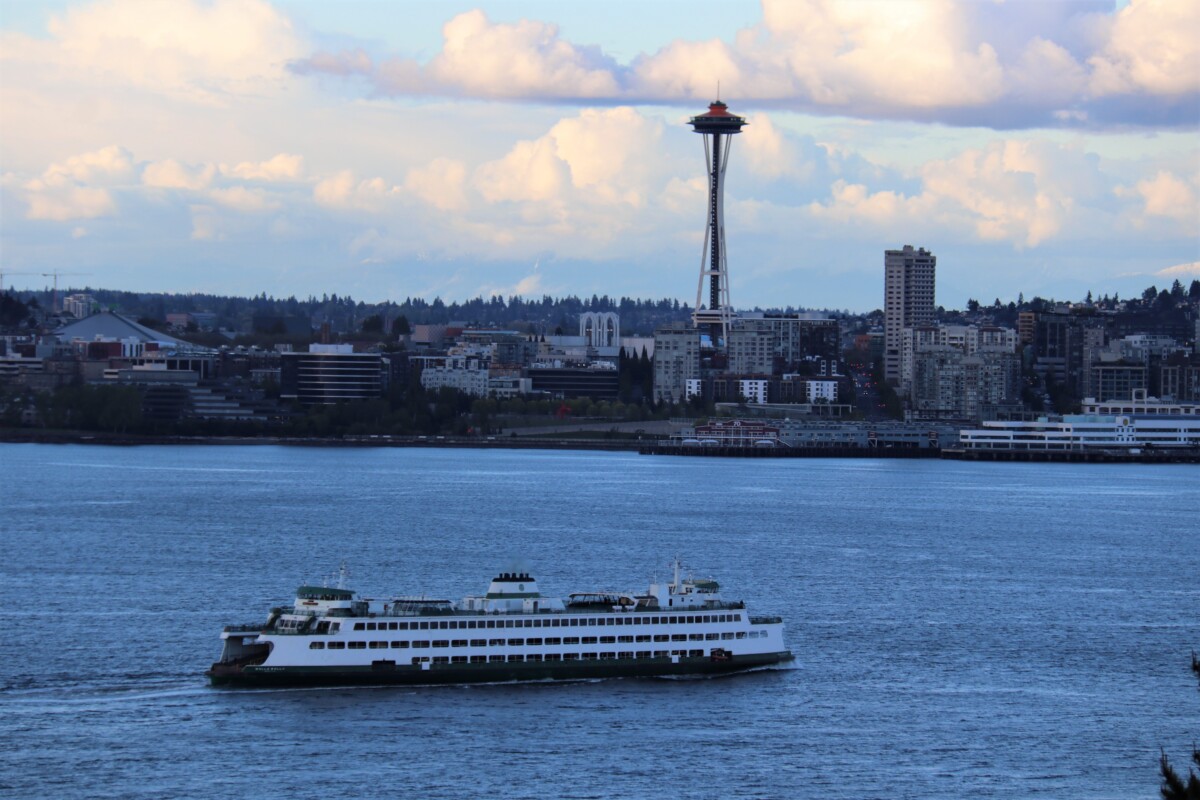 Cultural Sights to Explore During 2 Days in Seattle

Gifted with a temperate Mediterranean climate – mild, mostly dry summers and cool, wet winters – Seattle has the perfect weather for exploring. The Space Needle, Seattle’s treasured 520-ft. saucer-shaped urban icon, provides the most prolific view of the city itself. Offering 360-degree panoramas of downtown, the port, distant Mt. Rainier, and both the Cascades and Olympic Mountains.

As is common in the travel industry, Wander With Wonder sometimes receives complimentary products and services. However, you can always count on Wander With Wonder to report with honesty and integrity on those places we believe offer wonderful opportunities for our readers. Wander earns income from ads and affiliate links on our site. Some of those links are for Amazon. As an Amazon Associate, Wander earns from qualifying purchases. None of these practices influence our reporting, but we believe in full disclosure. For further information please visit our legal page.

An idea that began as a doodle scrawled on a napkin by local hotel executive, Edward E. Carlson, became the centerpiece of the 1962 World’s Fair. Today it still endures as a lasting symbol of the city. The Space Needle, one of the most recognizable landmarks worldwide, consummately mimed the Exposition’s theme—the Age of Space.

Insider tip:  If you’re running short on time during your 2 days in Seattle, but still wanting that great vista, swap the overlook at Hamilton Viewpoint Park for the Space Needle. You’ll bypass the $70 admission and $15 parking fee, but still get awesome pictures of Seattle’s Elliott Bay Harbor. Instead of a sky-high selfie, you can star in your own iPhone video. With colorful container ships, ferries, and high-rises on the facing waterfront, all framing the Needle in the distance. Did you bring a four-legged friend with you on your Seattle sojourn? You’ll be happy to know that leashed pets are welcome at Hamilton Park.

For a quirky detour during your 2 days in Seattle, stop by to photograph the Fremont Troll. At 18-ft. tall, he’s quietly living under the north end of the George Washington Memorial Bridge. The unsightly giant from the Billy Goat’s Gruff fairytale keeps a shiny metallic eye on the goings-on in the neighborhood.

Forged of rebar, wire, and two tons of ferroconcrete, the troll sculpture snagged the winning prize at the 1990 Fremont Arts Council competition. The purpose of the contest? To alleviate the ‘dumping ground/haven for drug dealers’ plaguing this area underneath the cantilever bridge.

The Fremont Troll was the creative genius of four local artists: Steve Badanes, Ross Whitehead, Donna Walter, and Will Martin. Inspiration was derived directly from Norwegian folklore. The troll clutches a Volkswagen Beetle with California license plates as if he is emerging from the earth. Once upon a time, before its vandalism, the ‘Bug’ housed Elvis memorabilia.

Be sure to include this off-the-beaten stop on your 2 days in Seattle. Scale the sandy hillside for a chance to peer over the ogre’s shoulder or sit atop one of its gargantuan fingers for a photo.

Insider’s Tip:  Log onto the internet and check out the troll’s FACEBOOK page. Who could have imagined?

No trip to Seattle is complete without the ultimate shopping experience at the Pike Place Fish Market, just up from the downtown quay. Here king salmon, turbot, and Alaskan halibut routinely sail through the air—from the hands of the fishmongers right into the arms of their patrons. It’s more efficient that way.

According to one of the business’ four co-owners, Anders Miller, “You call out the order, and your colleague throws it.”

This practice, while entertaining, also saves time and steps. After all, steady shoulders are required for a tiring shift of ice shoveling, heaving weighty boxes, and regaling the crowds with 30-lb. fish flying across the counter.

Insider tip:  Even though the fish market opens around 7:00 am–earlier on Sundays–fish-throwing doesn’t get in full swing until much later in the morning. You generally have to purchase seafood to be in line for a fish toss. However, the Pike Place Market staff keeps some stunt fish of lesser quality around to surprise passersby. These inferior slabs of marine meat are later donated to local animal sanctuaries to feed their wildlife.

Fish Fly at Seattle’s Pike Place Market, an Iconic Stop During Your 2 Days in Seattle

While on a tight schedule, with only 2 days in Seattle, we couldn’t afford to linger at Pike’s Place till the real fish flying began. Nevertheless, I thoroughly admired the herculean-sized seafood. I was amazed by the impressive variety, even though I am not a habitual fish eater. Swordfish and Hawaiian tuna steaks, Dungeness crabs, octopus, and squid were piled up next to monstrous whole king salmon and trout. Laid out side by side—spine to belly—on ice.

Then there was the American anglerfish partially dangling over the display case by a chain. This ferocious specimen from Disney’s Nemo has light-up glands for luring its prey.  With piranha-like teeth, it did look like a devil pulled up from the deep.

For a diversion, travel a couple of hours out of the city to Mt. Rainier National Park. More than a million visitors head to its 200,000+ acres of pristine wilderness.  The main draw is hiking, biking, summiting its namesake stratovolcano, and fishing. And in the right season, stopping to view the wildflowers.

We went the second week in May, just a fortnight past the snow tires and chains requirement. At first, we were met with a drizzle. As we climbed towards the higher elevations, that moisture changed to snow. Giant flurries pelted the windshield of our rental car. Further up the mountain pass, we ran into sleet where tiny pellets of ice pinged off the hood.

Old-growth forests lined the serpentining highway on both sides. The Douglas firs and hemlocks were rimed with algae and fluorescent-green moss at the lower heights. As we climbed, they quickly metamorphosed into an endless assortment of snow-covered Christmas trees. Even into the warmer months of the summer, there will still be plenty of white stuff at the visitor center and the usually cloud-enshrouded Mt. Rainier itself.

I felt like we were cruising down Santa Claus Lane, a twin-track thoroughfare flanked by yuletide arbors. Navigating the Mt. Ranier Highway in an unhurried fashion. Spending 2 days in Seattle should be on everyone’s bucket list.

A series of 26 glaciers blanket over 30-square miles of the park. The two-tiered waterfall at Narada freezes in wintertime, delighting ice-climbers eager to use their crampons. However, dormant Mt. Rainier – the main attraction – generally remains hidden in a nebula of mist.

Insider tip:  Keep an eye out for beautiful red buckleberries in bloom all the way into late August. Bring a jacket, even in the summertime. There are always remnants of snow on the Park’s mountainous slopes at the higher altitudes. Besides, the days are cool and windy.

Keep your eyes peeled for the resident wildlife. While driving, we saw an entire elk herd grazing without care. Birdwatchers, you’ll be thrilled by the close-ups of cobalt-blue-and-black Stellar’s Jays at the Visitor’s Center. They dart alongside the animated Gray Jays, Canada’s newly-selected national bird.

Additional Attractions to Check Out in Seattle

With so many things to do, the Emerald City—named for its proliferation of plant life—might require a second visit. Contemplate these supplemental entertainment ideas:

Traveling Tips for your 2 Days in Seattle

The Seattle/Tacoma International Airport (SeaTac) is the closest airport to the city. Since Seattle is a seaport destination, ships regularly leave from its pier, skirting Canada en route to Alaska. Most cruises steer through the Inside Passage and its gateways: Ketchikan, Sitka, Juneau, and Skagway.

Interested in a journey by car or RV? Seattle is a great starting point for road-tripping through the Pacific Northwest. Travelers can visit Portland, OR (173 miles), across the Columbia River, or head to Spokane, WA (278 miles). There are several great National Parks within a 2.5-hour radius: Mt. Rainier, Olympic National Park, and the San Juan Islands at Puget Sound’s entrance. Snoqualmie Falls, listed on the National Register of Historic Places, is a mere 30 minutes away.

According to most Seattleites, the best time of year to visit the Evergreen State is September to October. For the clearest skies and driest weather, summer wins, hands down. It also affords the best views from the Space Needle and chances for phenomenal hiking at Mt. Rainier. If you plan to arrive in the morning during July and August, be prepared to wait in long lines at Rainier’s Nisqually entrance. Summer marks the high season, so expect higher-priced accommodations (peak rates) and lots more tourists. Room rates rise, and availability drops.

Perfect weather appears in early autumn when the fall foliage comes in. Seattle’s winters bring the possibility of drizzling rain for days on end. Constant downpours can deter even the most avid of vacationers.  Arguably the best travel times are the shoulder-season months: April to May, then September to October.

If you want to maximize your time in the city, I recommend renting a car. There’s good public transportation in Seattle – the monorail, Sound Transit trains, and the metro. But public transport isn’t practical for going out of the city or optimizing every second of your time in town. A rental car will serve you best. Plan on paying for parking, even at your hotel.

Articles Related to Ultimate Guide to 2 Days in Seattle

2 Days in Seattle – Add It to Your Bucket List

Honestly, 2 days in Seattle are great for a romantic weekend getaway or a 48-hour family mini-vacation. It’s the ideal venue to layover for an upcoming cruise. With outstanding gastronomy, cultural icons, and a healthy nightlife, Seattle should be on your list of places to visit. For my husband and me, it was a fabulous escape. We turned in our car at the airport, grabbed a shuttle van to the pier, and waved goodbye to Seattle en route to Alaska. When you are planning a trip to Seattle, WA, Portland, OR, or anywhere else in the Pacific Northwest, let Wander with Wonder be your guide. Check out our other articles in Wander’s Ultimate Guide to 2 Days series.

Ultimate Guide to 2 Days in Seattle

Sat Oct 29 , 2022
It is no top secret, I adore winter.  Even though we are living in Florida, I grew up in Pennsylvania at a time when it snowed in November and thawed in March.  It has normally been a magical time and winter season in Europe is unbelievable.  If it was thoroughly […]